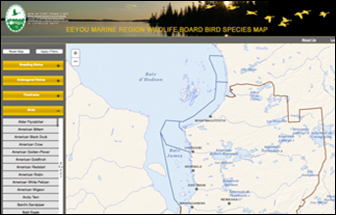 Wildlife Board - Bird Species Observations
The Crees have the exclusive right to harvest certain species and they have the right to harvest any species of wildlife in the Eeyou Marine Region to fulfill their economic, social and cultural needs. Some restrictions may be considered to allow for conservation.